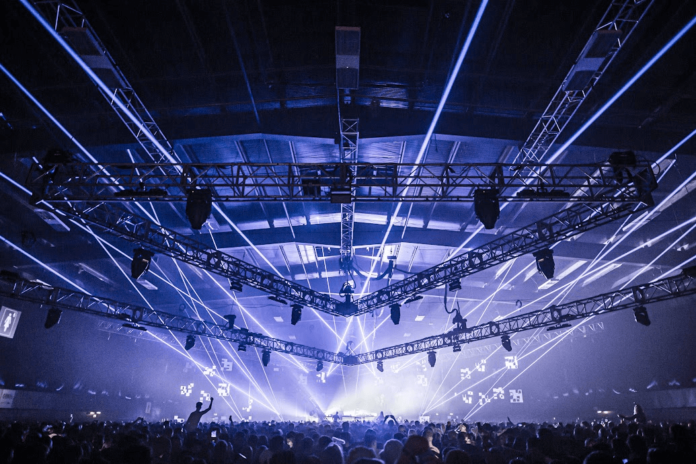 It’s been two and a half years in the planning, but the final countdown to Terminal V Festival’s highly awaited comeback has begun.

More than 80 international acts will imprint their musical mark on Terminal V over 22 hours, with 6 exclusive back-to-back sets, 6 live sets and a handful of weekend residents playing twice across both days.

It will be the largest indoor music festival in the UK, but with the addition of a new outside space for Easter 2022, it will be slightly hybrid. With five primary indoor stages running over all of the venue’s massive linked halls, as well as a new large additional outside space encircling the halls with two more enclosed stages and more attractions, the site will be changed like never before.

April will also see the return of their The Palms Tent, a 7th stage curated alongside Edinburgh’s Paradise Palms record label especially focused on local talent.

On Saturday, the 6000-person Area V stage will have Amelie Lens, Sven Vath, Dax J, and Helena Hauff, while 3500 people will flock to The Terminal to watch Alan Fitzpatrick, Joyhauser, Deborah de Luca, and T78, and the more intimate Cargo will host Haai, Dr Rubinstein, and Shanti Celeste. The Hangar will sway to the sounds of Kobosil, VTSS, and others, while The Green House will feature Floorplan, Ewan McVicar, Kornél Kovács, Mike Servito, and Luke Solomon, while Blackbox will include Hector Oaks, Frazier, Regal, Alignment, and more.

The stage has been set for 40,000 people from all around Europe to descend on the Scottish capital after more than two years of planning. The anticipation and excitement among ticket holders for Terminal V’s most ambitious event will undoubtedly be tremendous. Do not miss it.

Tickets are limited, head over to https://terminalv.co.uk/ to grab one before it’s too late!